Periods of intense creative work tend to conflict with my ability to ‘write about’ the process. When I was at art school teachers would often want to see words describing an artwork; before it was made, during the process … and a summary after completion – yet, on most occasions I had to write the lot at the very end, as the ‘word’ part of my brain refused to co-operate until the work was finished. To me there really is a divide between the creative process and vocabulary … I don’t tend to suffer the ‘fear of the blank canvas‘ but to express what is on the canvas can be quite beyond me :)

I do enjoy writing though, and keeping a less formal visual diary like this blog allows me record parts of the creative process, which hopefully can be of use to others in some way, and also if I forget things … :) I have posted quite a bit about my Tarot journey (going back to May 2010). However, in the last months – which have by far been the most intense – describing the process in words went completely out the window …

I find that with multiple artworks, there is a process which involves ‘bringing everything together’. In the Tarot, there are 78 individual artworks which have to resonate as a ‘whole’, which makes the challenge of unifying just that little bit bigger :)

To me, this ‘bringing everything together’ happens gradually; as the artworks evolve, you see the ‘whole picture’ emerge from the individual pieces – letting an artwork ‘rest’ for a while also enables you to view it with fresh eyes. When I got as far as the Kings in the Tarot (with only the Queens to go), I went back to the beginning and reworked each painting (some more than others), as part of the finishing stages.

While time-consuming, it has been an exciting process to rework the drawings/paintings, and see that in the 3+ years I’ve worked on this project I have learnt a few things :) I’ve also roped family members in to all sorts of decision-making help, painted countless eyes, hands, mouths and noses (for some reason these stand out), been a complete social hermit, yet seen too many sunrises before going to bed …, which made it ever so exciting (and emotional) to finally send the 78 designs off to the printers yesterday! 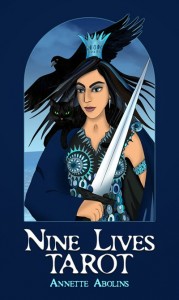 Box cover design for my Tarot cards – the cards will be available to buy as a full deck and also as individual prints (most likely A3 size).

Thank you for visiting and take care!