After working on this project for near on 3 years you would think I’d have thought about the final size of the printed cards… not so (too busy drawing)… That is to say, I have always imagined the finished cards to be the same size as my Morgan-Greer cards, but to actually get out the ruler and measure them didn’t happen until just the other day… ouch :)

The things you discover with a ruler in hand…

In order to print the cards the size I had in mind (~7cm x 12cm), I quickly discovered that I needed to adjust each illustration slightly (elongate) to match the intended size. Despite the extra work, it has given me the chance to revisit and add any final touches to the cards while making sure they all ‘tie together’. Fresh eyes, and a few compulsory detours are an integral part of any artistic project. 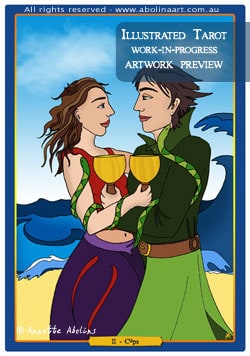 Border or No Border

Initially, I visualised the finished cards with a blue border… On the screen, and also in my first edition A4 size prints. The border seemed to frame each illustration while at the same time creating a connection between the images. However, as I delved into the size-altering maze, the border began to feel like the culprit that was removing too much of the illustration. I tried several different versions, and finally (after consulting with my family design experts), I have decided to go ‘border-less’ and change the title banner to fit with an edge-to-edge style (and rounded corners) printing of the cards: 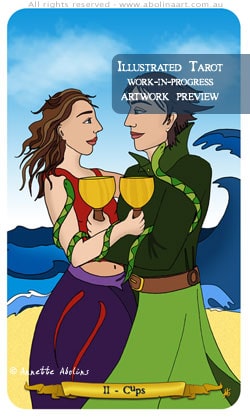 Some cards conjure up an instant image, which feels right to draw … other cards inspire more than one image; which tends to lead to more than one version. I think the reason I’ve ended up with several versions of the moon, is because I really like the moon (both the real one and the symbolism and images inspired by the card) … These last few days have been spent going over the major arcana, changing the size and adding final touches. Though when I got to The Moon I couldn’t help but do another version of it… At this point, I think I will go with the 3rd version, as there is something wonderfully tranquil about sitting on a beach and looking at the moon with a cat :)

Take care and thank you for visiting :)