Introducing the King of Spades

With a dark blue background and light blue ‘floating pips’ for the royal spades, I needed a different way to float the spades partially outside the coloured background (very light blue on edge white = not much contrast).

I tried borders, changing the colours (as in previous post), and finally, settled on extending the background where the pips float ‘outside’. At first, it seemed like a somewhat drastic change, but as i played around with it, the different elements seemed to hold together in a new way. Thinking of the artwork as having 3 tiers in order to create depth:

After applying changes to the spades, I went over hearts, clubs and diamonds – adjusting them to follow the same approach:

Naming a Deck of Cards

Names and titles are often elusive to me until the work is complete … yet to avoid a last minute panic, I thought I would share some of the ideas bouncing around, with a little background on where they come from – to see if any stands out as ‘the name’ (please be honest) :) 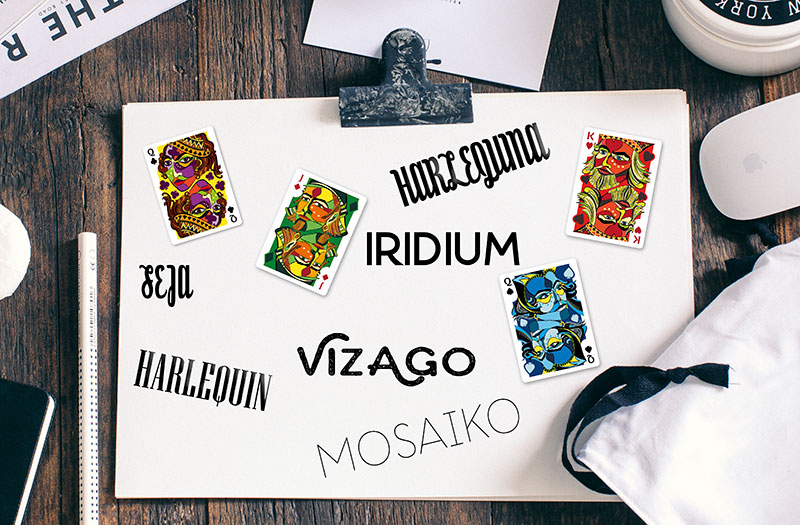 IRIDIUM – is a rare metal in the platinum family and the element with the highest resistance to corrosion in the Periodic Table of Elements. Named after the Greek goddess Iris (derived from the Latin word meaning rainbow), for the striking and diverse colours of its salts.

There are such beautiful names for colours (Vanadium, Aquamarine, Cerulean, Tangarine, Vermillion … ), yet choosing one colour to represent many didn’t seem quite fair in this case … As many are derived from metal oxides, I searched the periodic table of elements for an element which could represent all colours – and found Iridium … [This metal oxide can be used to enhance colours and ceramic glazes, and, with its impressive resistance to corrosion and high melting point – above 2000 degrees Celcius, it is also common in ceramic refractories.]

The drawing/painting style comes from my love of drawing faces loosely inspired by cross-contour drawing …. My whimsical ‘face’ teapots (which sparked inspiration for this deck), involved the use of metal oxides, glazes and high-temperature firings, which in a way brings a ‘rainbow metal name’ into focus…

Following the journey into the world of chemistry I looked for more descriptive names … names that could describe face and/or colour:

HARLEQUIN – a reference to the fanciful, multicoloured and jester like nature of the courts
HARLEQUINA – same as above but with a feminine touch

MOSAIKO – inspired by stained glass, mosaic and colour, although… I just did a search online and discovered it’s also a no-bake cake (!)

VIZAGO – Esperanto word meaning face. I like the idea of a global language and a name that describes what the deck is about.

SEJA – inspired by my background, Seja is the Latvian word meaning face

HARLEQUIN draped in colours and fun has been at the top of the list for a while, along with my other favourite; IRIDIUM … Recently, though I’ve had several recent votes for VIZAGO, which I have to admit I am warming to … I would love to hear your favourite in the comments below :)

Moving on to Aces and Number cards …

The theme of faces continues throughout the deck and the Ace of Hearts has two faces framed within. The colour scheme follows that of the royal hearts, with the emphasis being on red.
There will be some tweaks before I’m happy, but here’s version 1:

My initial thought was to maintain the detail from the Ace in each of the number pips, though I’m still playing around with different ideas to see which works best.

1. Identical to the Ace

2. Scaled back amount of detail in faces

In the versions above I’ve mirrored the hearts (left to right) as well as rotated (top to bottom).

Below, the hearts are not mirrored, yet still rotated to maintain the 2-way view:

5. Dark accents and emphasis on eyes

Thanks for visiting – and if you have thoughts on name or versions – I’d love to hear!
Annette :)